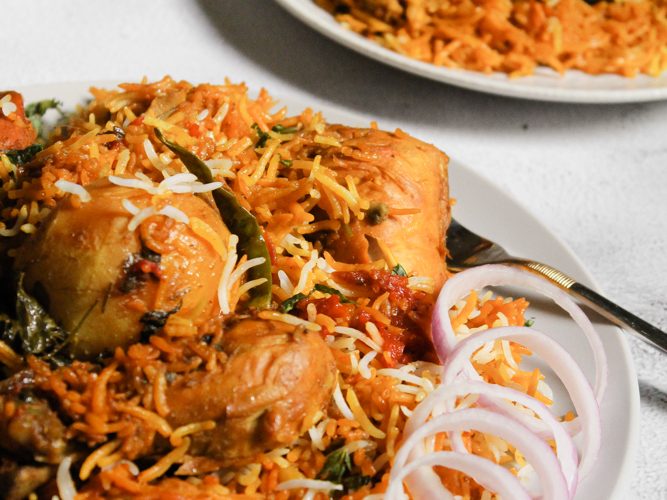 Chicken Biryani is a prominent and flavorful Pakistani dish with crazy tender bites of chicken with boiled potatoes in a deliciously spiced and fragrant rice.

Biryani an evergreen classic, really needs no introduction. It’s aromatic, it’s heavenly and one of the most loved delicacies not just in Pakistan and India but also across the globe.

It is rich in flavor, grand in tradition, and elaborate enough to take center stage at holiday dinners, Eid or weddings and specially on every Friday lunch.

How to make Biryani?

Biryani is a rice dish made with layers of rice, spices and  meat of your choice.

My favorite, of course, is the one made by my mom that I grew up eating.Will share the recipe soon of my Mama’s signature Biryani.

You can make Biryani with following types of rice:

There are different types of Biryani Recipes that originate from several cities of Pakistan and India.

Despite of the fact that Pulao has its own prominent place in the hearts of Desi foodies but it is also true that it cannot take the center stage in-front of Biryani.

Pulao is so easy to make, cooking all the ingredients together in one pot.Check the yummy Yakhni Pulao Recipe.

Unlike Pulao, Biryani involves cooking rice and meat separately and finally cooking them together by forming layers of each in a pot.

A quick and easy homemade Chicken Biryani is something you cannot escape.

Nothing like a good plate of aromatic biryani! This Pakistani Chicken Biryani hits all the right spots with its wonderful aroma and exotic flavors!

For making Chicken Biryani all you need to do is ,In a large pot,first golden brown the chopped onions then add in ginger garlic paste along with some green chilies and saute until fragrant.

Then put your chicken in it and fry until color changes.

Once your chicken is sauteed, add in your spices , yoghurt and tomato paste.

Mix them well together and cook it on medium flame until all water gets dried and oil comes on top.

Make sure not to full done the chicken at this stage because it will further get cooked at the final stage of giving steam / dum to biryani.

The mouth watering savour mixture of lemon, vinegar , tamarind and dried plums are the secret ingredients of this Biryani recipe.

It brings out the authentic biryani flavor. Add this mixture in the pot and simmer for 5 minutes , then turn off the flame.

Meanwhile cooking the chicken, you can boil the potatoes in another pot, if your family loves potatoes in Biryani.

Once all your above steps are done from tender spiced Chicken to boil potatoes and rice , then it’s time to assemble the Biryani in a large pot .

Last but not the least, in a cup prepare the food Color mixture to pour on top of the biryani for giving it a authentic look and amazing aroma. Mix together some biryani essence , water , food color and saffron and pour on top.

Cover the lid tightly and leave it on low flame for the dum/steam.

One of the most famous ways of cooking Biryani is the dum method. It involves sealing the vessel thoroughly and keeping the lid closed to trap in the aroma. The Biryani is then cooked over slow fire/dum.

What to serve with Biryani?

Biryani is a complete meal in itself, perfect for all occasions; whether a hearty meal on a lazy Friday afternoon or a grand, scrumptious indulgence at the dinner table on Sunday.

Chicken Biryani is one of my most favorite dishes and definitely one of the most requested meals at my house. We often pair it with a cooling raita, garlic chutni and a bowl of salad.

If you want to serve biryani on some grand occasions of birthdays, get togethers or on festive occasions like Eid Al adha and Eid ul Fitr you can serve it with the sides like Korma, Seekh Kebab , Chapli Kebabs. Some appetizers like cheese samosas followed by the desserts like Lotus lasagne or shahi tukray.

There are many possible variations in the Biryani recipe that originate from several cities of Pakistan. 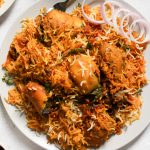 Did You try this recipe? Let me know in the comments, or tag me on Instagram @the_cravingzone. Also, please consider leaving a star ⭐️⭐️⭐️⭐️⭐️ rating in the comment section below.