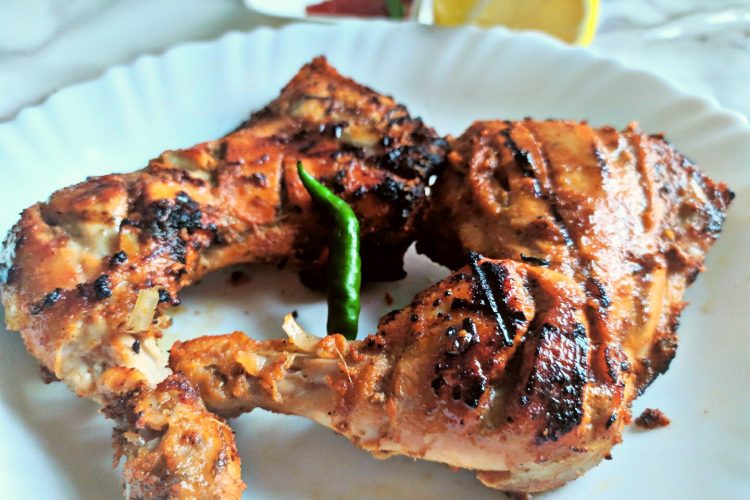 Quick and juicy Stove top Chicken Tikka is an easy method of making restaurant style chicken tikka on a skillet ,pan ,grill or tawa, right in your kitchen.

Chicken tikka is one of the most popular dish of India and Pakistan.

This is an easy chicken starter recipe and is a dry chicken item without masala/ gravy and made on stove.

Chicken is marinated in yogurt with a blend of spices and this yogurt makes the chicken tender, soft, and juicy.

Usually chicken tikka is made in tandoor or an oven but the main idea behind posting my recipe is to make chicken tikka on a pan with an ease and yet get the same delicious taste of Tandoori Chicken Tikka.

Tikka could also be made from beef ,mutton and lamb.

The only major difference that can be seen is that tikka masala contains more masala/gravy or spices in it.

Tikka and tikka masala are originated from India. The preparation of chicken Tikka and chicken tikka masala is almost the same but with the addition of gravy /masala or mixed spices in the Tikka Masala makes it different.

As tikka masala comes spicier, it is a also bit hotter than normal tikka.

Other variations of Chicken Tikka:

Large variety of chicken Tikka dishes are available.Check the list below for other variations;

During your weight loss journey ,you can comfortably have these delicious, low-carb delicacies for dinner along with grilled vegetables.

Chicken Tikka is primarily made up of boneless chicken, yogurt, lemon juices and Indian or Pakistani spices, none of which would get in your way of weight loss.

Simply avoid fried chicken as it is full of oil. Better still, have homemade chicken tikka, tandoori or roasted. Along with soup or salad.

Which Chicken cuts to use?

Chicken Tikka is traditionally made by cooking small pieces of boneless, skinless chicken over a fire pit.

Some people prefer to make tikka with meat on-the-bone for improved flavour.

One chicken will give you 4 Tikka cut pieces, 2 thighs and 2 breast pieces.

How to make Chicken Tikka on Stove?

Normally, chicken tikka is made in tandoor or an oven but today we will make them on stove top.

Then add chicken tikka pieces,mix well and marinate for 2-4 hours or overnight in refrigerator.

While marinating the chicken ,be sure to get the marinade into all the slits.

2.Frying and Grilling of chicken:

In a pan pour oil then add marinated Chicken and cook on high flame first, from both sides then proceed to slow cooking for about 15 minutes or until done.

NOTE:The pan used has to be non stick otherwise it can spoil the dish, if the pan is not a non stick one.

Then put small grill on stove top and grill the chicken Tikka , simultaneously basting it with olive oil from all sides.

The above step is not compulsory.It only helps in getting a nice color on top and gave that charred look that an outdoor Tikka would have. Lastly, give coal smoke in a tightly covered pan.

Which food color to use in chicken Tikka?

Yellow food color is often used which I have not. If you are particular about the color, use good Kashmiri red chili powder or paprika which yields a good vibrant color. Otherwise orange food color also does wonders.

NOTE: Wear gloves to rub the marinade over your chicken pieces , otherwise your hands will get orange or may starts to burn due to heat of spices.

There are 3 different ways by which you can prepare your Chicken Tikka:

What to serve with Chicken Tikka?

This stovetop chicken Tikka is great served on its own or used in curries like chicken tikka masala.

After this juicy and spicy Tikka, you can serve some desserts like Shahi Tukray, Lotus Lasagne or Blueberry Cheesecake.

How to Store Chicken Tikka?

Whenever you crave Tikka goodness,put the marinated chicken out of freezer.Once thawed, then fry and enjoy!

What to do with Chicken Tikka leftovers?

Leftovers are always so handy on busy weekdays.And specially Chicken Tikka leftovers are like ‘Icing on the Cake’.

They can be used in many ways like shred them and make sandwiches,pasta,pizza, stuffed buns or chicken ring. 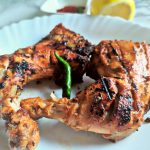 Did You try this recipe? Let me know in the comments or Tag me on Instagram @the_cravingzone or use the Hashtag #cravingzone